There are so many books out there that it can be hard for readers to find the books they would love to read.  Every month I feature a fellow romance author who writes paranormal romance, romantic suspense, or amazing female characters. 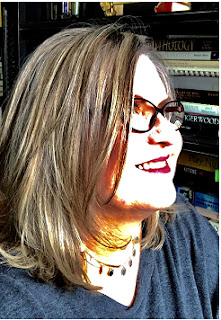 It's time for Back to School and this month's Heroine Fix is a fellow Soulie, Rhonda Frankhouser, who writes about feisty cowgirls falling in love.  Her most recent release, Legacy of Ruby's Ranch, is all about the matriarch whose namesake ranch inspired the series.

From the moment her grandmother presses an ancient amulet into her palm, Rube Gautier’s life changes. Chosen to lead a mystical life in the service of her village, she’s expected to marry within the community and confer with the spirits to lead her people, but all she really wants is a normal life, on a ranch of her own far away from Oklahoma, with a man of her choosing. When she lays eyes on Mac, hope for a different future begins to blossom.

World War II hero, Mackenzie Adams finds more than he bargained for at a local livestock auction. When he catches sight of the fiery redhead commanding a crowd of roughneck ranchers, his heart pounds faster than it had when he’d stormed Omaha beach. He’d never seen so much passion and so much angst in such a beautiful package. Unfortunately, she’s bound to another life.

Sparks fly between Rube and Mac even as danger lurks around them. The spirits insist Rube must fulfill her destiny, and they will do what they must to see it done, even if it means taking those Rube loves away from her.

The Power of Tradition and Symbolism in a Good Story

Hi, my name is Rhonda and I’m an addict. Over my years of book-addiction, I’ve found I’m drawn to drama and controversy. I’m not proud of it, but I get sucked into the against-all-odds stories where tormented souls search and fight for freedom and love. The more desperate and angsty, the better. Even if it means the character in question will lose what they’ve sought to follow, and change their own set of (often misguided) deep-seated values, I’m all in. Oh sure, I cry and fuss at them. But I respect them all the same for following their beliefs.

Even when reading fiction, I pick up something about the plight of man’s battle between good and evil. I’ve learned the most about religion and spirituality, not from the Bible or the animated preacher, but from talented authors weaving it into their beautifully researched prose from every time period. Signs and symbols play a powerful role in reminding the faithful follower of their purpose in life. Some talismans are meant to soothe while others threaten to scold. Think the Christian cross, the Ischthys (Fish), the Star of David, and the Yin and Yang, to name a few. Each symbolizing the essence of their own religious or spiritual beliefs.

In my latest release, Legacy of Ruby’s Ranch, my heroine, Rube Gautier, is born into a culture steeped in ancient tradition. When her grandmother placed the silver Lauburu into Rube’s hand, the burden of her people’s safety and future was hers to bear. For this feisty cowgirl who dreams of a new life, the struggle between love and tradition tears at her.

The Lauburu is an ancient Basque talisman which symbolizes culture and unity among other things. Some interpretations lean toward the philosophical (physical, mental, emotional and perceptual), while others believe the four heads are representative of the essential natural elements or seasons. In my story, I’ve used a mix of these beliefs to guide Rube’s journey. As a former philosophy major, I’ve had a bit of fun mixing my two worlds together.

Do you have an important symbol in your life? How does is support and guide you? Next time you’re reading a new book, see if you can pick out instances in the story line where tradition and culture play a part. I’m sure you’ll find a few. I’d love to hear about your experiences, both as a writer and reader where values dictated a character’s path. Thanks for listening.

What is the wildest thing you’ve done to research a book?

I’m not sure if it’s wild, exactly, but I spent hours binge watching Ancient Aliens on the History Channel. My husband was sure I’d lost my mind.

I do a little plotting to get the main theme of a new book, then I let my pantser personality take over. When I first started writing years ago, I spent days outlining different story ideas, which ended up being a writer’s prison for me. When I tried to force my characters to move and act according to my will, they went on strike and stopped talking. So, I gave in and let them dictate the story. They haven’t disappointed me so far.

I’m DEFINITELY a flow writer who prefers to be alone during the writing process.  I can’t even listen to music that has lyrics. I’ve tried, trust me, but what I found on my read back, were those same lyrics written into the storyline. So, it’s nice easy acoustic guitar or soft Celtic love songs for me.

What is your favorite thing to do to relax?

When I really need to relax, I head to the mountains, find a hammock and breathe. I’m not a big city kind of girl. Birds chirping, wind in the trees, the scent of pine, these are my kind of heaven.

Who is your favorite fictional crush?

My latest fictional crush is, yes, cliché, Jamie Frasier from Outlander. Oh mercy, I’m a sucker for a hot highlander. I know it’s not original, but it’s true. It’s no wonder my gorgeous husband has a bit of a red tint in his hair. Wink!

This is a timely debate for me to enter into, especially after my recent research binge of the Ancient Aliens series. I’m easily an astronaut girl. They would be smarter and more cunning. That alone would outdo the primitive sensibility of the caveman.

Thank you, Rhonda, for being one of my Hidden Diamonds!  Join us next month on September 26th for next month's feature.