For this month's Heroine Fix, I'm going back to a superlative example of the magic of puppetry and David Bowie-ness, Labyrinth. 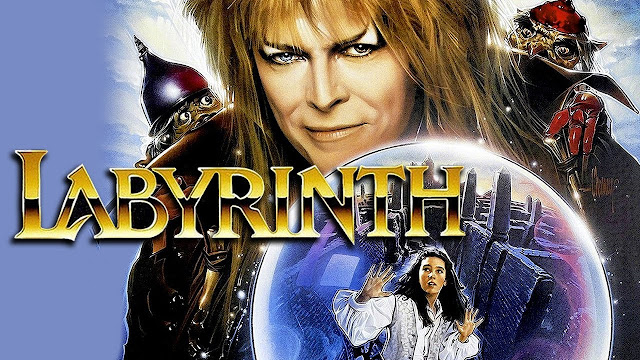 Sara is a teenager who wishes the goblins would come and take her baby brother away (personal note, my sisters can tell you that "I wish the goblins would come and take you away right now" is less effective than this movie makes it appear).  Struck with sudden remorse, she is given 13 hours to solve the Goblin King's Labyrinth or the child will be lost forever.  Launched on a young adult equivalent of Alice's trip to Wonderland, she solves puzzles and riddles to save her brother.

Sara is an interesting heroine, one of the first openly flawed heroines that I remember.  At the beginning, even a child can see that she is an immature, spoiled brat, more focused on her reflection in the mirror than in her clearly terrified little brother.  As the film progresses, she matures, accepting the challenges as they are rather than giving up with a plaintive whine of "But it's not fair."  (Another personal note, I have used Jareth's reply on my own children: You say that so often.  I wonder what your basis of comparison is.) 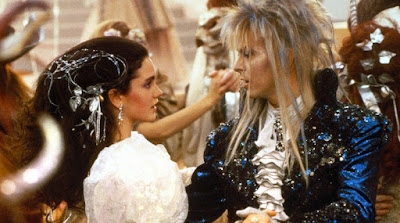 I've read any number of articles which say that Labyrinth is supposed to be a metaphor for life, which is not fair and tends to throw arbitrary challenges at us and in which we cannot always judge people by our first impressions.

As a child, I simply loved Sara for her adventures.  I wanted to solve the Labyrinth and make friends with a fox-knight, dwarf and horned orangutan.  I wanted to dance with David Bowie in that gorgeous dress from the masquerade ball and then smash my way free to defy him. 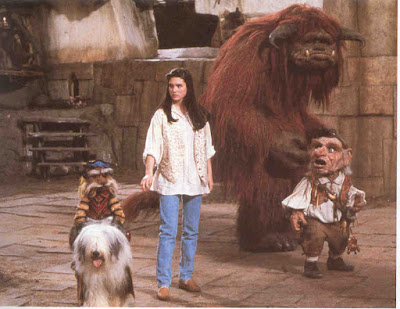 As an adult, what I find interesting is how Sara's character matures throughout her adventures.  At first, she is frustrated by how the Labyrinth defies all the rules she has come to expect, but she slowly learns not to make assumptions and to meet the challenges on their own terms.  What I find particularly interesting is that one of the assumptions that she dismisses is being nice.

Sara doesn't have any success as long as she's being a meek and polite girl.  She gets bitten by a fairy, misled by a worm, abandoned by Hoggle and dumped in an oubliette because she chooses the "convenient" option of down rather than the obviously-better-for-her choice of up when being held by the Helping Hands.

It's only when she steals Hoggle's jewels to coerce him into helping her that she starts to make some real headway.  She throws rocks at the helmets of the Goblin Knights, pinches the nose of the Door Knockers to force him to take his ring back, knocks the heads off the Fireys, smashes the crystal prison of the Masquerade Ball, rejects her possessions as "junk" to escape the Hoaders and takes an active role in the fighting through Goblin City.  None of these are "nice" things to do, but she doesn't compromise herself and her goals. 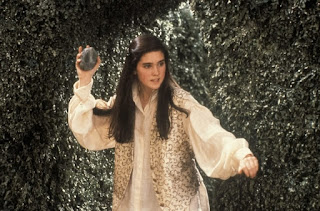 In the end, the movie is about Sara reclaiming her power.  At the beginning, she is powerless.  She can't keep track of time, allow the dog in the house or control her own schedule.  By the end, she is facing a being who can "reorder time and turn the world upside down" and despite all of his abilities, she can face him and honestly say "You have no power over me."

There's a beautiful moment during the final song, Within You, where Jareth is watching Sara run after a gravity-exempt baby.  Despite all his efforts to play with reality, she never gives up, always ready to charge up, down or sideways across another staircase.  As he sings the final lyrics, a sad resignation comes over his face.  That is the moment when he realizes he cannot dominate her.  During the final confrontation, he cajoles and begs her to "let me rule you and I will be your slave."

It might be a tempting offer for a less pure-of-heart heroine, but Sara walks away, winning her and her brother's freedom.  And in the end, she doesn't even have to give up her connection to the magic world of the Labyrinth.  Her friends return to join her for a celebration as Jareth is left looking in from his perch on a cold and lonely tree. 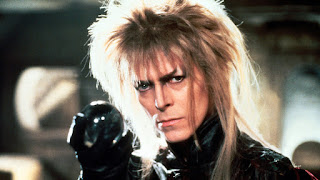 Sara doesn't have super strength or a black belt in mixed martial arts or a lifetime of spy and assassin training, like so many strong heroines nowadays.  I think that makes her more impressive.  Without anything but the typical abilities of any girl on the street, she defeats a primal foe who has actual godlike gifts, all by refusing to surrender her power to him.

That's someone who I can admire.
Posted by Jennifer Carole Lewis at 03:09