I've been reading comics and watching the related cartoons and movies for longer than I care to admit.  I spent as much time playing superhero with the boys as I did playing Barbies (who were usually  singing superhero ninjas anyway) with the girls.  However, one of the great frustrations I had was that most of the female superheroes were ridiculous, with silly powers and always needing to get themselves rescued.
﻿ 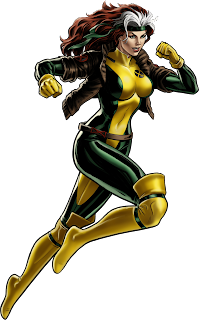 With one notable exception: Rogue from the X-men.

Created by the awesome Chris Claremont with her first appearance in 1981, Rogue is a fascinating character.

To begin with, her powers are unique.  She absorbs people's memories, personality and abilities through touch.  Those personalities and skills can then remain dormant inside her.  (Which I personally believe is the inspiration for Joss Whedon's entire Dollhouse series.)

However her powers aren't under her control, which adds an irresistible element of tragedy.  She can't ever be touched, not even a simple pat on the shoulder or a hug, let alone a kiss or anything intimate. 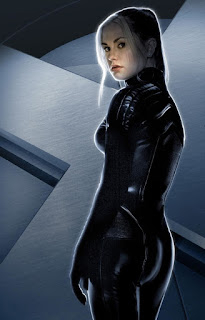 Anyone she touches ends up in a coma, unconscious while Rogue has their memories.  Something she found out during her very first kiss. The boy ended up in hospital and Rogue ended up with a horribly guilty conscience and foreign memories which would never entirely leave her subconscious.

I wish I had been the one to think it all up.  It's positively brilliant and leaves a huge scope to explore as a writer.

That's probably why she's been one of the more enduring X-men characters, appearing in almost all of its incarnations. 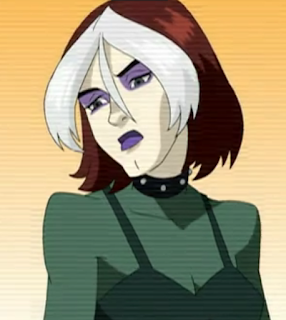 Personally, I've always liked her combination of kick-butt determination and aching vulnerability.  One of the scenes which has stuck with me over the years is from the 1980's X-men Saturday morning cartoon.  A heavy door is about to slam down, trapping our heroes somewhere unpleasant.  Both Wolverine and Beast are struggling to hold it up and Rogue saunters over to lift it up with one hand (in that particular version, she had permanently absorbed superstrength and the ability to fly from Ms. Marvel).  I loved the fact that she was able to effortlessly save the day and, looking back, I'm especially pleased that no big deal was made about her being stronger than the men.  It just happened to be her superpower and didn't need to be made the butt of a joke.

Rogue was one of the first true heroines I ever encountered.  She didn't need help from anyone else's storyline.  She was powerful and interesting enough to star in her own right.  She could stand toe to toe with any hero or villain and yet was still entirely feminine. 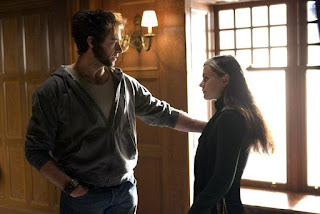 One of Rogue's most powerful storylines is one which was adapted for X-men 3, where a "cure" for mutant abilities is discovered.  She has to decide whether or not to have a normal life, without superpowers but with the ability to touch someone, or maintain her powers and her isolation.  There have been several versions of this character arc.  In some she takes the cure, in others she doesn't.

To me, it's always raised an interesting question to explore.  What parts of myself would I consider essential and what would I be willing to sacrifice to achieve my dreams?  Would I sacrifice my eyesight for the ability to fly?  (I didn't say they had to be realistic dreams.)  Later, when I was doing research for Revelations and speaking to families whose children had special needs, I found myself thinking of Rogue and the cure.  These children had severe challenges, requiring constant care, but would their parents "cure" them if it meant sacrificing a part of their personality?  It would be a difficult decision.  On the one hand, a normal, possibly happier life, but it would be a terrible price to have to pay.

Rogue is a great heroine for exploring identity issues and the impact of isolation.  She's got hundreds, if not thousands, of voices in her head: the personalities she's absorbed.  Her strength of will is what holds them back.  When her character is well-written, those second-hand memories give her a depth beyond her apparent age.  She's denied the most basic of human comforts and can never allow herself to drop her guard, or else she could hurt those she most cares about.

In my fan-fiction days, I always wanted to give Rogue a happy ending without having her lose her powers.  I'm not alone as the character has been given a number of romantic relationships with creative work-arounds for the touching issue.  However, like many of the most interesting heroes, it's the air of tragedy which keeps writers coming back.  Every reader can identify with feeling isolated and how our greatest gifts can dovetail with our deepest sorrows.
Posted by Jennifer Carole Lewis at 03:07