2019 is almost over, which means there are a number of us looking up from the shredded wrapping paper and wishing for new books to enjoy (or to use to retreat from family drama).  This month's Hidden Diamond is Barbara Russell, who has a steampunk romance with a defiant, brilliant heroine with empathic powers.  This book is a combination of superheroes, spies, and supercool technology with a terrifying serial killer villain, which means it ticks almost every single one of my favourite story boxes. 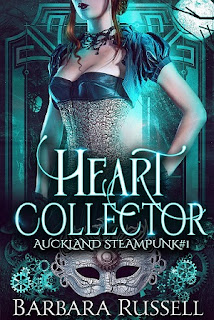 Isabel senses other people’s feelings as if they were her owns. But MI7’s leader is too worried about Isabel’s safety to let her join the team.  Eager to prove that her power is valuable, Isabel volunteers to meet Murk, a dangerous Supernatural man who can turn himself invisible. MI7 desperately tried to recruit him and failed.

She believes that her power is enough to convince Murk to become an MI7’s agent and help apprehend the Heart Collector. If he wants to attack her, his feelings will broadcast his intention, and she’ll be ready.  What Isabel isn’t ready for is to fall in love with the man who will collect her heart.

Barbara has kindly shared notes from Lady Ermintrude and an excerpt from The Heart Collector.  She also tells her her wildest research rabbit hole and her opinion on cavemen vs astronauts.

You don’t mind if I whisper, do you? Hastings Manor is full of ears, and people’s best pastime is gossip. Thank goodness I’m not that type of lady. But I have to speak my mind.
My niece Isabel, the current Duchess of Sussex, has gone mad. She’s accommodating, here in Hastings Manor, street urchins. Street urchins! From Auckland’s rookery!
Good gracious, I need a sherry. These street urchins don’t even have decent names and the youngest one, called Trigger—ptf!—spat on his teaspoon to clean it. The older, the one called Murk, I think he’s a thief or a murderer. Apparently, he can turn himself invisible. Invisible! So inappropriate.
Those dark eyes mean trouble, mark my word, but Isabel thinks he’s charming. Poppycock, I say. I’m sure she’d like to dirty-puzzle with him. Oh, the horror. But does she listen to me? No one is listening to me anymore. A bunch of rebels they are.  Now, where’s my sherry?

ONE OF THE PERKS of being a duchess and the lady of Hastings Manor was that I could make my own decisions.
Most of the time.
I bunched a corner of my long brocade skirt and climbed the sweeping stairs toward Victor’s office. The bustle, heavy with satin ribbons, bounced lightly, tapping on the small of my back.
On the landing, one of the little cleaning machines that roamed the house trotted around, buzzing as its brushes dusted the white marble floor. A puff of steam trailed behind it while its wheels and pistons whirred. I strode on, the star-bright tiles sparkling under my velvet slippers.
The butler bowed stiffly, carrying a tray with tea and cakes that smelled of cinnamon. “Your Grace.” He stepped aside to let me pass.
“Hollom.” My heels’ click-clacking noise died down on the blue rug covering the entrance in front of Victor’s office.
I raised my fist to knock but stopped inches away from the gleaming, polished oak wood, needing a moment to collect myself. Victor had to see reason. Convincing him that my role in the investigation was vital wouldn’t be easy, but I was nineteen and properly trained in combat. More or less. The point was, I could face danger.
My resolve wavered, and I bit the inside of my cheek. On light feet, I turned and slid inside my late father’s personal library. Victor’s supernatural hearing wouldn’t catch me in the room protected by thick walls, and the old leather-bound volumes calmed my nerves.
I cleared my throat before rehashing my speech. “Victor, you’re the leader of Military Intelligence Seven, but as Duchess of Sussex, I have the right to  . . .” I shook my head. This sounded patronizing. I took a deep breath to slow my pounding heart, glad that I wasn’t wearing a corset. Another perk of being a duchess.
I squared my shoulders. A wrong word and Victor would dismiss me. “Victor, I kindly request… would you… I would appreciate if you assign me to the ongoing investigation on the Heart Collector, since I believe my skills can be an asset.” There. Simple, polite, and to the point. 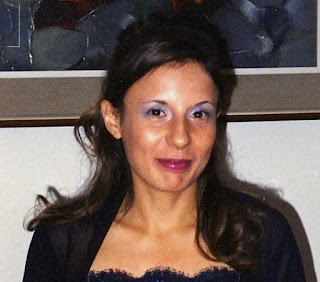 Wearing a corset. I thought, was it that terrible? Would people faint for real? I had to know. So I got a corset from a shop that rented costumes and theatrical equipment and put the corset on (a friend helped me tie it up behind my back), and Oh My Gosh! I lasted a grand total of 1 minute and ten seconds before ripping it off me. Awful. I was about to throw up. Those women back in the nineteenth century were brave souls.

I’m a plotter. I need a map before starting writing, and while I can write anywhere if I need to, I prefer solitary places with no distraction . . .  except for my two dogs. Sometimes I have to throw balls and cuddle tummies while writing.

I love reading of course. I read absolutely everything except for horror, and I love trekking. I found that walking in a forest really helps the writing process.

I have a perma-crush for Will Carver. He’s the protagonist of a book by Bec McMasters (one of my favourite authors.) I love all her male characters, but Will, a werewulfen a person infected by the lupe virus, left a mark. It helps that I picture him like Tom Hardy, lol.

Who would win, astronauts or a cavemen?

Well, I know that Buffy and her friends will have something to say about this, but the answer is obvious. The astronaut. Have you seen the Martian? A guys who can survive on Mars for more than a year can take a caveman. Unless the caveman is like Angel . . .

Thank you, Barbara, for being one of my Hidden Diamonds!  If you'd like to check out more about Barbara, or her books, there are links down below.  Join me next month for the next Hidden Diamond!

Previous blog post: A Heroine Overdose, a look at all the amazing heroines that I featured in 2019.