I first picked up my first Little House book in grade school through a Scholastic Order.  In the ultimate judging a book by its cover, I chose it because it had a horse on the cover and I was going through a horse stage. 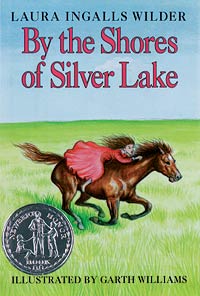 In By the Shores of Silver Lake, I found the story of a pioneer family on the move, shifting from their grasshopper and scarlet fever plagued home in Plum Creek to the unsettled prairies of De Smet, South Dakota.  As a military brat who was constantly on the move myself, it spoke very strongly to me.  I could identify with Laura's constant struggle to find a balance between her internal drives and the demands of society.
I immediately demanded the complete series.  I was intrigued by the early books, such as Little House in the Big Woods﻿, with its catalogues of food preparation and self-sufficient household management, and On the Banks of Plum Creek, where Laura faces the town bullies and her first experience of social shame.
But to me, the part of Laura's story which truly ensnared me were the stories from her years in De Smet and the slow courtship between herself and Almanzo Wilder.  Starting with his week twenty-four mile round trip sleigh rides to bring her home in Little Town on the Prairie, Almanzo always struck me as the epitome of a romantic gentleman. 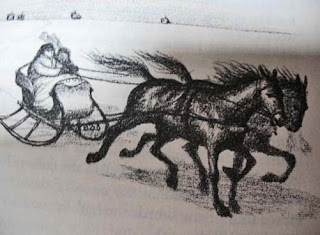 He never puts any pressure on Laura or implies that she "owes" him for his efforts.  At great risk and personal inconvenience, he makes a grand gesture simply because he wants to do something to make her happier.  Laura isn't certain how to react.  On the one hand, she desperately wants to go home on weekends and Almanzo is her best chance to do so.  On the other, she doesn't want to mislead him into believing that they are courting.  It's a difficult balancing act, especially considering that Laura is only fifteen and has spent most of her life interacting only with her family.

As an adult who adores a good love story, I'm disappointed that there never seems to be any moment where Laura shifts from seeing Almanzo as a friend to seeing him as a romantic partner.  But as a child and adolescent, they seemed to be one of the great couples of literature, and their love was as inevitable as the rising sun. 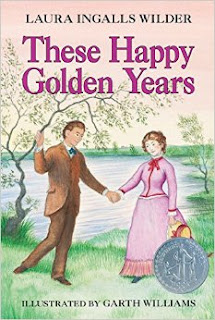 They get married and set up housekeeping on a claim of their own, in a small house which Almanzo built with his own hands.  It's a perfect happily ever after.

Except it wasn't.  I recall the moment when I first realized that Laura Ingalls Wilder wasn't merely the author of these stories.  It was the first time I read These Happy Golden Years and abruptly realized that the author's name was the same as the married name of the main character.  I was shocked and then began to wonder what happened after the wedding.  I read The First Four Years and was horribly disappointed to discover things did not go smoothly for Laura and Almanzo.  Their house catches on fire, they're always in debt and Almanzo gets sick with diphtheria and is permanently injured, needing a cane to walk for the rest of his life.  I cried when I realized that Laura had to leave the beautiful little house that she was so pleased with and board yet another westward wagon.

There are really two heroines to examine: the fictional Laura Ingalls and the real life Laura Ingalls Wilder.  The fictional Laura is the first one I got to know.  She doesn't quite fit in with the expectations she must live up to.  She's a tomboy, she's curious, she's fiercely protective and loyal to her family, and she's proud of being self-sufficient and beholden to no one.  As she grows up, she takes on the role of family provider, earning money to support the family and serving as a guide to her blind sister, Mary.  She's a strong young woman who refuses to back down and allow others to push her or her family around. 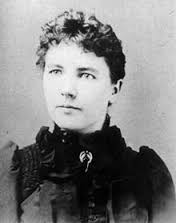 There's a lot of that strength in the real life Laura as well.  She worked hard to keep her family going through famine, fire and disease.  She started her life over and over and over and, while I'm sure she must have gotten discouraged, she didn't give up.  Toward the end of her life, she decided to fictionalize her early life story.  Initially she wrote an autobiographical novel, Pioneer Girl, but then split it into the novels of the Little House series.  The books helped to keep her family going as she and Almanzo grew too frail to maintain the daily chores of the farm.

She's not a revolutionary or a progressive thinker.  She simply refuses to bend on her own internal principles.  She never quite seems to question that perhaps the expectations of her society are wrong or unfair.  Instead, she quietly finds her own compromises and happiness.

Laura offers an interesting middle ground of rebellion.  She doesn't shrivel up and conform but she doesn't insist on anyone else following her example either or attempt to overthrow the authorities she disagrees with.

That's the element of Laura which I admire.  She found her path and committed to it, working hard to get where she wanted to go.
Posted by Jennifer Carole Lewis at 02:36