Learning from Rudolph the Red-Nosed Reindeer (1964)

When I first began to write, one of the common pieces of advice was to learn good story structure from the books and movies I enjoyed.  This is good advice, but I've found that I often learn more from bad stories, the ones I should have enjoyed, but didn't.  Figuring out why those stories didn't work and plotting out how I would have done them differently has taught me a lot about editing and story-telling. (Warning: this post will contain spoilers)

I'm sure I'm not the only one for whom the stop-motion Rudolph the Red-Nosed Reindeer is a holiday staple.  And I'm sure I'm not the only one who finds herself wincing through the nostalgia.  The story itself is pretty good and it has a lovely message about being true to yourself and found families, but there are a lot of dated approaches and references that grate on a current viewing.  So this month, I decided to think about how it could be updated, while still keeping the good parts. 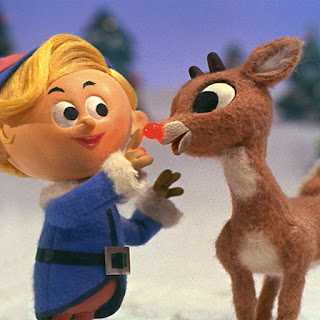 First off, let's look at what works.  I love the stop-motion aesthetic and think it works really well for a fanciful holiday story.  I like that Rudolph leaves the North Pole to try and find a place that he belongs, but ends up finding it among friends who also don't fit in.  I think that part of the story speaks to a lot of us who felt like outsiders growing up.  From the moment Rudolph leaves with Hermey, the plot flows nicely.  They run into the prospector, Cornelius, and the Abominable Snowman (Bumble).  They float off on an iceflow and find the Island of Misfit Toys.  Rudolph sneaks away, afraid that his nose is drawing the Bumble and endangering his friends.  Then there's a growing up montage, and he decides to go home and confront his family.  He discovers his family is gone and goes to rescue them from the Bumble, but only succeeds with the help of his friends.  Then they all return to the North Pole and Rudolph helps Santa save Christmas.

That's good.  What's not good are the repeated sexist references sprinkled throughout the story.  Any reference to "not for does, this is bucks' work" needs to be ditched immediately.  Next to go can be the references to what "makes Christmas"; such as silver and gold ornaments on a tree or lots of toys.  There are too many families celebrating in too many ways to declare something as a required Christmas experience.  Luckily, those things are fairly minor.  They don't affect the plot and are mostly asides which don't even drive dialogue.

Slightly harder is toning down the rejection from Santa and Rudolph's parents.  It makes them very difficult to like.  I honestly think an updated version would provide a powerful opportunity to examine how painful microaggressions can be.  Most people would already agree that Rudolph's parents treating him as a freak is bad.  But most people don't understand how a careless comment or joke can cause harm.  I would probably write the introduction as Rudolph is shy, his parents encourage him to be himself, but he still faces rejection from the other reindeer.  That would allow the message of self-acceptance to be more resonant.

There is a bit of a nasty undercurrent to the 1964 story.  The misfits are only accepted because they are useful.  But people don't have to be useful to be accepted.  By changing it so that Rudolph has a supportive family, he's got an unconditional place to belong.  And by gaining friends, he learns that he doesn't need to rely on his reindeer peers for acceptance. 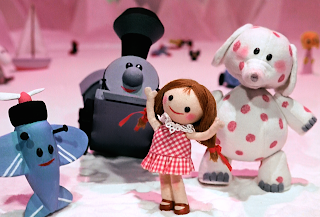 It also would add poignancy to the Island of Misfit Toys (which is my favourite part - side note: I wanted an elephant with pink polkadots and a swimming bird).  These are toys that self-loathe themselves because they don't fit in.  Except their differences make them the perfect toys for particular children.  There are people waiting to love them just as they are, which is a fantastic message for a children's movie.  I would make that part more explicit, showing them being happy with different children.

The music would have to be updated.  The songs are mostly forgettable, aside from Rudolph the Red-Nosed Reindeer and Holly, Jolly Christmas.  And since I'm partial to musicals, I'd keep the key points of the story tied into music.

I would also tweak Cornelius.  Rather than having him be a prospector, I'd make him a naturalist or an environmentalist (which is why he knows so much about Bumbles!).  He finds and helps Hermey and Rudolph. 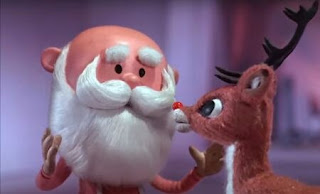 The ending also needs work.  I'm not a big fan of pulling out the Bumble's teeth to make him helpless.  I'd much rather Cornelius be working with him and ends up gentling him so that the North Pole doesn't have to be afraid any more.  And Hermey gets accepted because Santa has a nasty toothache (and that's why he didn't want to eat).  He fixes it and Santa makes him the official North Pole dentist.  Rudolph can still save Christmas, but he tells the other reindeer that he doesn't need them to be his friends.  He knows who he is and he's proud to be red-nosed.

Posted by Jennifer Carole Lewis at 01:41