Every couple of months, there will be a debate in the writers' corners of social media.  Are epilogues a good tool for wrapping up a story or are they the tool of a lazy writer who should have made the ending clear within the main plot?  In other words, are they useful/enjoyable or not useful/enjoyable? 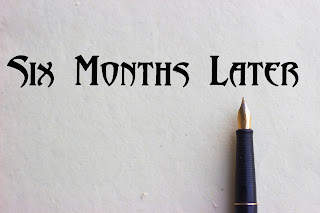 For the most part, I like epilogues, so I usually just shrug and say "No one's forcing you to read them if you don't like them" to myself and move on to the next amusing cat video.

However, the last time this debate circled, I actually asked myself the question: why do I like epilogues?  Their critics raise valuable points: an epilogue shouldn't be necessary to complete the story, and they are often used as bait-hooks which can leave the story feeling incomplete.  I've been annoyed by some epilogues in the past, so why do I continue to believe that some stories need an epilogue in order to work?

I sat down to figure it out.  And now I'm sharing my conclusions with you. (I'll mostly be talking about romance novels since that's most of what I read these days.)

The most consistent factor that makes an epilogue satisfactory (in my opinion) is the timeline/pacing of the main story and the main characters' relationship.  When I'm reading a fast-paced suspense novel, the epilogue is a welcome opportunity to breathe.  It's a chance for the author to show me that the characters have overcome their challenges and have a smoother path ahead.  Especially in romance stories, I like to know that the characters are still finding their happily ever after with one another, without the stress of saving the world, or being on the run, or whatever other danger has overshadowed the relationship to that point.

Perhaps I'm too much of a realist to put my faith in a relationship that has only existed under high stress and forced proximity.  Especially if the individuals in question have spent most of the story fighting their feelings for one another.  In those cases, an epilogue reassures me that the ending really was the start of a happily ever after.  Seeing the couple a few months or a few years after the official end gives me that contentment.  I don't need them to have gotten married or have kids, or anything like that.  I just need to know that they're still happy and together.

Another factor that makes an epilogue necessary (again, in my opinion) is when the conflict of the relationship has been solved via a grand gesture.  If I am reading a character who has chosen to self-sabotage their feelings (eg.: pushing their love away to "keep them safe" or because "they deserve better" or because the character thinks they'll only screw everything up) then I need to know that they have truly overcome their tendency to run away rather than face their problems.  A grand gesture can be wonderful, but it's only one moment in the character's history.  If there are lots of other moments where they've made the wrong choice, then that one moment isn't enough to convince me of the change.  I need to see that they've sustained it over time.

This also applies when a character is struggling with addiction as part of their arc.  Relapse is an expected and frequent part of recovery, so I need to know they've made it through those initial hurdles.

Critics are right when they say that an epilogue shouldn't be necessary.  All the crucial plot elements and character growth should happen in the main story.  But an epilogue can provide reassurance to the reader.  It gives comfort and a sense of security.

That's what an epilogue should do.  It shouldn't be used to undermine the main story or to solely provide a hook for the next book in the series.  It should enhance and support the main story, relieving any lingering tension for the reader.

I suppose, by this definition, the epilogue isn't necessary.  The conflict has been resolved and what the epilogue shows is that it has remained resolved.  For some readers, they may not need the reassurance that everything continues to be okay.  And that's all right, they can skip it and move on to their next read in perfect confidence.  But for those of us who wonder what happened after The End, an epilogue can be a perfectly enjoyable thing.  Like dessert after a good meal.  It might not be necessary, but it is satisfying.

In other words: "No one's forcing you to read them if you don't like them" so please, let's all agree to disagree and finish by watching this adorable cat video.

Posted by Jennifer Carole Lewis at 00:57