One of the first pieces of writing advice that I received was to examine my favourite movies and books to see why they worked.  This is good advice, but I've actually discovered that it can be more helpful to examine movies that I should have enjoyed, but didn't.

I love the Jurassic Park movies.  They're a great combination of action and terror.  But just about everyone agrees that Jurassic Park III missed the mark.  It failed to connect with audiences, even the enthusiastic fans.  The question is: why?

Superficially, it should have worked.  It followed the formula of the other movies, the special effects were decent, and the cast was talented.  But I can explain where Jurassic Park III worked and where it didn't, and I'll share how I would have rewritten it to avoid some of the inherent problems.  Those are the exercises that I've found most helpful for improving my own writing.

It case it's not already clear, there will be spoilers in this post.

There are actually a lot of good elements in the movie.  Setting up a repeat of the "rich guy bribes Dr. Grant to come to the dinosaur park" element and then twisting it when Grant discovers that the Kirbys aren't actually rich was a good idea.  There was a good mix of humour with the danger, which gives the audience relief from the thrills and usually make them eager for more.  The displays of raptor intelligence, using a trap to lure in the humans and sophisticated communication, were awesome.  The pterosaurs and Spinosaurus were something new for the audience to be afraid of.  And, as a parent who as watched way too much Elmo's World, I will admit to a little schadenfreudish satisfaction watching the actor who plays Mr. Noodle get killed and eaten.

In my opinion, one of the biggest problems with the structure of the story is that there are very few tension builds.  In order for an audience to connect with a story, they have to be engaged with it.  They have to care about the characters and they need to understand the stakes and dangers so that they're worried when the characters are in jeopardy. 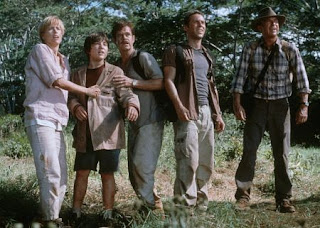 In Jurassic Park III, the audience is rarely given a chance to understand the dangers.  The writers didn't tell the audience that the grad student, Billy, had stolen raptor eggs, thus provoking the raptors to track the group.  We're never really shown what the spinosaurus's capabilities are, so we have no way to judge when the group is in danger from it.  The clearest example of this is when the Spino breaks through the fence.  We had no idea it was possible, so the moment is basically a jump scare rather than a tension build.  Ten seconds later, the group is behind another barrier and safe, so the audience doesn't feel any lingering effects from what should have been a major moment.

That's something that a lot of writers have problems with.  We, as authors, know everything that's happening and sometimes we forget to let our audience know the details they need to share in our excitement.  This is where beta readers and test audiences are crucial.  They don't know anything about the story and thus can point out when an author's vision hasn't quite made it into the current draft.

Another challenge is giving the audience enough time to make an emotional connection with what's happening on the page or on screen.  If things happen too quickly, they don't have an impact.  In movies, the time is built into what's on screen and for how long.  In a book, the author needs to recreate the subjective experience of time.  Time seems to slow down when an experience is intense, so an event that only takes a few seconds can last for several paragraphs or several pages.  The focus shifts from the narrative to the emotional.

This is why Jurassic Park III doesn't resonate the way Jurassic Park or Jurassic World does.  The dangers are rushed into and over too quickly.  The audience doesn't know what the stakes are.  Too many things are treated as surprise twists, but the twists rarely have any consequences past the immediate moment.  Those are all lessons that writers can learn from.  Figure out what the big moments are in your story and make sure that the audience clearly understands why they're important and that they have important consequences afterward.  Don't be afraid to take your time with them. 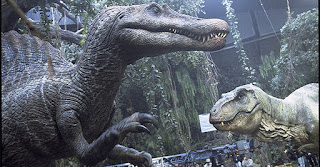 First things first, I would have had Ellie be with Dr. Grant as opposed to being married to someone else.  (This isn't a structural plot issue, but I shipped them in the first movie and since I'm writing it, I can do that.)  I also would have gotten rid of the Kirby's divorce and reconciliation subplot.  It didn't really add anything to the story.  They could have been married and arguing about the best way to parent their son and the story still would have worked.

The movie opens with the son (Eric) and the mom's boyfriend doing a Dino-Soar parasailing tour.  The boat is attacked behind fog and crashes, sending the two into Isla Sorna.  This is the inciting incident.

I would have opened with a similar scene, but with a few crucial changes.  I would have had the mom there with the son.  She's taking him on an "adventure" that his dad wouldn't approve of while they're on a family vacation.  Paint the dad as a rule-following fuddy-duddy and the mom as the freewheeling fun parent.  The tour guide mentions that they have to be careful because of an elevated U.S. military presence in Costa Rican waters (this is to set up the rescue at the end).  The kid is sent up on the parasail and is having a great time... until the pterosaurs come out.

The pterosaurs attack the sail and end up snapping the line holding the kid to the boat.  He goes flying toward the island.  The mom frantically tries to get the tour guide to follow but he refuses.  End the scene with the mom screaming and fighting to get to her kid.

This is a very relatable situation which instantly raises stakes for the audience.  We know the kid is alone on the island, which is full of dangerous dinosaurs.

Next scene, the mom and dad are together on the resort.  They're blaming each other (Dad: he never should have been anywhere near that island, Mom: It's not important now, we just have to find him.)  During the argument, mention that the family runs a plumbing supply chain, profitable but not stratospherically rich.  Mom has approached some mercenaries that the tour guide knows and suggested, but they won't go without a dinosaur expert.  Cue a poster about Dr. Alan Grant's scheduled lecture.

This set-up allows the audience to know that the Kirbys are fooling Dr. Grant, but it also compresses the timeline.  In the original movie, the kid is on his own on the island for 8 weeks, which they did to make it plausible that the kid learns to navigate the island, but also decreases the stakes.  (This was also another lost opportunity to build tension, where the parents expect to find their child dead, but I don't like dead kid stories so I'd make it a race against the clock instead.)

The scene where the Kirbys lie to Grant and claim to want him to serve as their guide for an island overflight could continue pretty much as is.  I would have Dr. Grant arguing with Ellie.  He wants to accept the deal because they haven't been able to get funding for their digs.  She tells him that he's crazy for even thinking of going back there and refuses to go.  He decides to go anyway, setting up a nice wedge between them which makes it questionable whether or not she'll take his call later on in the movie.

Now we've got a good batch of interpersonal tension going, plus the audience knows what the stakes are. 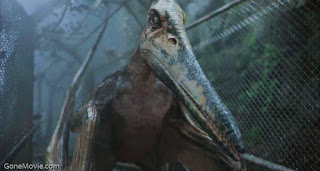 The rest of the movie only needs a few tweaks.  I would make the raptors and the pterosaurs the main threats and forget the spinosaurus.  Or, if necessary to include the Spino, make it a secondary threat (much like they did with the aquatic mosasoar in Jurassic World).  Have Grant explain what these animals can and can't do so that we know what the stakes are.  Spend more time building the tension in the big impact scenes.  I'd keep Billy (Grant's grad student) stealing the eggs and later sacrificing himself to save the kid, but make sure the audience is following along with it.

The difference between a story that works and one that doesn't is often pretty subtle.  That's why analyzing stories that don't work can be a great tool to make sure your own stories shine.

(And now my shameless self-promo moment, if you like the way I would have told this story, you'd probably like the books I wrote!)

Posted by Jennifer Carole Lewis at 02:30