Vincent Harris has appeared in every lalassu novel before getting his own story in Division.  He's gone through big changes since he first appeared on the page.  He's been a long time favourite of mine and I'm proud of his character arc.

He started off as the annoying little brother of my Revelations heroine, Dani.  He was a Peter Pan type who was always ready for the next party and never took anything seriously.  His big brother, Eric, dragged him along to a job interview for a professional bodyguard firm, trying to get him to take some responsibility.  Only it turned out to be a trap set by a multinational CEO looking for people with superpowers.  Eric and Vincent are taken captive and need to be rescued by their sister (and her newfound partner, a psychic child therapist). 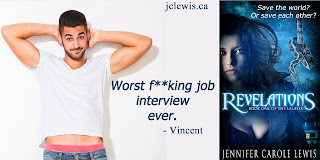 Eric and Vincent have different reactions to being taken prisoner.  Eric struggles to resist the CEO's psychic powers of persuasion, but Vincent falls for it hard.  He's seduced by the temptation to have someone else take charge of his life, of not having to hide his abilities and being recognized as a powerful and admirable man.

When Metamorphosis starts, Vincent is deeply changed.  He's lost his confidence and is consumed by shame about what he did to his people and his family.  He's also been exiled to an isolated community in the far North, because his family are worried that his mind is still being controlled. 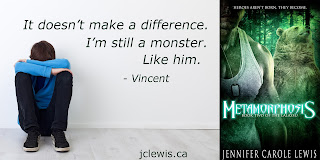 The experience has broken Vincent's joie-de-vivre, but he's still trying to escape from his fears by numbing himself and hiding from the rest of the world.

In Inquisition, he's starting to return to the world, but there's still a lot of trauma that he needs to process.  He's hiding his pain through sarcasm, pushing other people away. 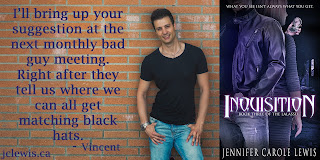 But even though he's undeniably prickly, there's still a hint of the caring person underneath.  He's focused on protecting his family and helping others, even though he sees himself as an anti-hero at best and an untrustworthy villain at worst.

The hints of his return to a hero status begins in Judgment, when he helps the prisoners at Woodpine to overthrow the guards and escape.  This is the book where he initially meets Annika, but like so many great romances, she's not overly impressed with him at first and he's more focused on the task at hand than his feelings. 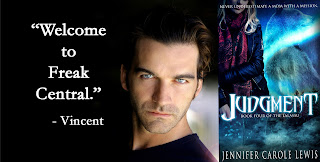 But the part of his story that I'm most proud of is recognizing his trauma and depression.  As someone who's suffered with my own mental health challenges, it was thrilling to give him a chance to do what is, in my opinion, the most courageous act of all: taking a chance on hope.  Falling in love doesn't cure him, because that's not how love works.  But it does give him a chance to see himself through fresh eyes and realize that maybe he's a better person than he's given himself credit for. 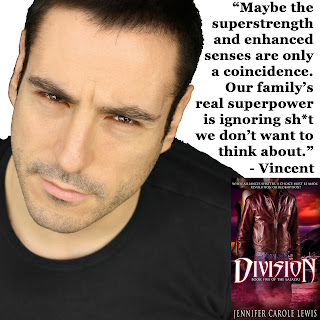 Through it all, he never loses his best quality: his sense of humour.  There are times when it's bitter and dark, and sometimes it's just off-the-wall.  Writing his dialogue has given me many moments of laughter and I'm glad to share them with everyone else.

And now the obligatory buy link, if you'd like to pick up your own copy of Division.

Posted by Jennifer Carole Lewis at 03:19