Welcome to the first installment of my look at the heroines which influenced and inspired me (not always in a good way).  And I couldn't resist the pun, since a good story is always addictive.

I wanted to start with one of the first stories I ever read by myself: A Little Princess by Frances Hodgson Burnett. 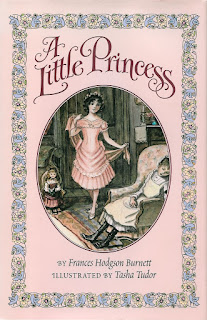 It was one of my first chapter books and I devoured it and then sulked because I couldn't go away to school in Victorian England and become  a parlor boarder who becomes a scullerymaid who transforms into a wealthy heiress.  I wanted a china doll because of Emily (which I got and still sits on my shelf). 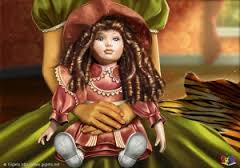 Sara enchanted me as a teller and devourer of stories whose imagination never failed to help her escape the worst parts of life.  Her gracious manner, no matter how badly she was treated, was something I aspired to.  (Turns out I am way too inherently sarcastic.)  Like every great fairy tale, Sara's life is plunged into ruin when her father dies and leaves her without a fortune.  The cold-hearted proprietress of Sara's boarding school, Miss Minchin, confiscates all her beautiful things and banishes her to the attic, telling her she must now work or be thrown out into the streets.  Sara survives through the help of her friends and her ability to find love and connection even with the rats in the walls.  She attracts the attention of the Indian Gentleman next door, who undertakes a secret mission to alleviate her suffering, sending his Lascar, Ram Dass, into Sara's attic with food and luxuries.  Then it is discovered that the Indian Gentleman was a friend of Sara's father.  He has been desperately searching for her to restore her fortune.  Sara leaves Miss Minchin's and takes her fellow abused scullerymaid, Becky, with her as an attendant.  All is restored to where it should be. 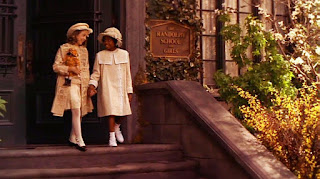 I've heard people criticizing Sara as a heroine.  The main issues seem to be twofold.  First is a problem with the princess fantasy: that royalty/upper classes are somehow better, that a girl should strive to be demure and polite (to her own detriment) and that having nice things is synonymous with better behaviour.  The second issue is that Sara is ultimately passive, a Sleeping Beauty dreaming her way through her difficulties until the prince comes to rescue her.
Let's tackle the problems with princesses first.  The book was written in 1888 and definitely has a classist attitude.  In fact, it's downright Victorian.  Which is not entirely offensive, because Queen Victoria was ruling when it was written.  The happy ending consists of everyone returning to the class they originally started with (Sara becomes wealthy again and Becky remains a servant, a happier servant, but still a servant).  Sara attracts help from others because they recognize that she is of a higher class.  That's a great place to start a discussion about charity and preconceptions with young readers.﻿

Sara is too polite.  She's practically an honorary Canadian and could be a citizen if she had opinions on hockey and poutine preparation.  She refuses to contradict people.  The best example is when she can't find a way to tell Miss Minchin that she doesn't need French lessons because she's already fluent.  Instead, she sits and studies a basic primer book.  But her politeness isn't from a lack of spunk.  Sara has a spine of steel, one that refuses to bend no matter how badly she is treated.  Even though her enemies would be nicer to her if they felt they had more power over her, she will not give them the satisfaction.  She won't allow her circumstances or those around her to dictate how she will act.

This is one of the reasons why I have trouble seeing Sara as a passive heroine.  It's difficult to remember, but her period of servitude starts at age 11 and goes to age 13.  She is a child, powerless in an adult world.  But she doesn't break, taking power wherever she can, whether it's making friends with a rat and sparrows, offering food to a beggar when she herself is starving and creating a world of imagination to lift her spirits. 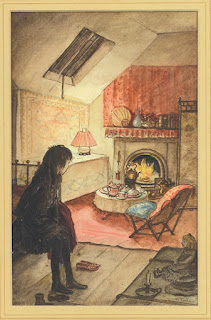 I see Sara's story as one of survival.  Not all trials can be overcome alone.  The challenge then is to find a way to survive with the spirit intact.  She faces the death of her father, her poverty, the abuse of her keepers and her isolation with gritted teeth and a fertile mind.  She keeps herself whole until she can be found.

I like to think that Sara had a plan.  Her intelligence is frequently remarked on and she spends what few free hours she has studying and improving herself.  Even in Victorian England, an education is a valuable thing.  I like to think that even if the Indian Gentleman hadn't appeared, Sara would have found a way out of Miss Minchin's as a governess or paid companion.  It wouldn't have been a glamourous life, but she could have improved her lot and maybe even found love.  Maybe she would have ended up running the school, creating a loving and nurturing environment for young girls.  More of the pupils liked her than Miss Minchin, as did more of the parents.

We'll never know.  Sara did get rescued.  And when she's back in her comfortable upper-class existence, she doesn't forget the pain of being hungry and forgotten.  The book ends with her making an arrangement with a local baker to give away bread to hungry children, with the bills going to Sara.

Sara cares very deeply about those around her, which is consistent with sensitive and imaginative people.  She isn't broken by her hardships, even though it's more than she thinks she can bear.  She draws strength from possibilities and potential, spinning a gossamer web of impenetrable protection.  That makes her a heroine worth coming back to again and again in my opinion.
Posted by Jennifer Carole Lewis at 03:54