Is The Crow A Fridging Movie Or Not?

Recently, I was embroiled in a debate as to whether or not the 1994 movie The Crow counts as a fridging story.  This is one of my all-time favourite movies and I began to defend it, but had to stop.  Were they right?  Could this beautiful dark romance be an example of toxic masculinity? 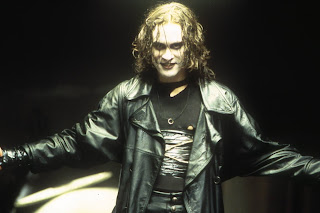 I had to take time to think about it rather than rely on a knee-jerk denial.

"Fridging" is a term that arrives from comic books, specifically from a trend of treating women as objects to inspire righteous rage in the male heroes.  It originated from a Green Lantern comic where the Lantern finds his girlfriend's dead body in a refrigerator.  However, there are dozens of examples and not just in comicbooks.  Aside from romance, pretty much all genres treat happy relationships as the end of action and tension.  Therefore a happy relationship is a preamble and a guarantee that either the relationship isn't really happy (i.e., one of the individuals is a traitor or faking their feelings), or someone is going to be hurt or die in order to launch the other partner into a murderous rampage.

This is a pattern of toxic masculinity, where feelings are considered bad, unless it's rage.  The partnership is meaningless except as a socially acceptable excuse for the main character to become violent.  The focus of the story is on the violence and celebrating righteous male anger.  Often the relationship is entirely forgotten once vengeance is complete and the hero moves on to violently brood his way into the next episode.

On the surface, The Crow seems to fit these parameters.  The story is about Eric and Shelley, who are in love and about to be married when they are both killed by home invaders.  Shelley is brutalized and Eric is killed before he even has a chance to try and defend her.  This creates such great pain in his soul that he returns from the land of the dead for vengeance.  His crow companion grants him instant healing and awesome martial arts skills.

Eric hunts down each of the four home invaders and violently dispatches them.  He also kills the crime boss who ordered the attack, wanting to intimidate the neighborhood into abandoning protests about tenant eviction.  There is a strong argument that The Crow is a male power fantasy.  Eric doesn't have to work through official or legal channels, he doesn't have to be patient.  People hurt him and he can hurt them back without consequence.

Shelley doesn't return from the dead to avenge her own rape and death.  She appears only in flashbacks and briefly at the end of the film to reclaim Eric for the land of the dead.  The story is about Eric and it isn't his own death that he wants to avenge, it's Shelley's.

However, I would argue that The Crow lacks the essential toxic masculinity element to make it a true fridging story.

First, James O'Barr wrote the original comic book, The Crow, to help himself to cope with the death of his fiance, who was killed by a drunk driver.  It was an active choice to manage his grief and feelings of helplessness.  In a toxic fridging story, the killed partner is solely an inciting incident.  They don't truly matter except as an excuse.  In The Crow, Shelley is never forgotten.  She is the heart of the story and there are frequent powerful reminders of the love that she and Eric shared.  O'Barr incorporated his feelings into every aspect of the story, and had included multiple romantic flashbacks which were edited out of the original comic release.

Second, the subplots of Sarah and her mother, and Detective Albrecht and his relationship undermine a toxic masculine interpretation.  Eric doesn't only seek vengeance, he also seeks to help the two living people who were also harmed by Shelley's death.  Sarah lost her mother substitute (Shelley) and was forced back into the orbit of her addicted mother and her toxic boyfriend (one of the attackers).  Albrecht tried to take up Shelley's fight to protect others and ended up being penalized professionally and losing his own marriage.

When Eric kills Sarah's mother's boyfriend for his role in Shelley's death, he takes the time to help the mother.  Holding her in front of the mirror, he whispers "Mother is the name for God on the lips and hearts of all children.  Morphine is bad for you."  We then see the drugs emerge from the track marks in her arms.  For the first time, the mother looks up and seems to be aware.  Later, we see Sarah and her mother in their apartment, having breakfast.  This is one of only a few scenes with sunlight, indicating a true healing and change. 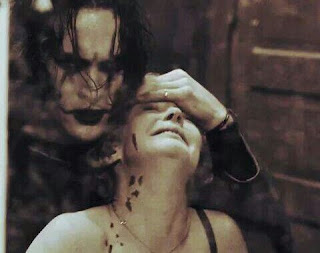 Eric breaks into Albrecht's home and has a frank conversation with him, not about the killers, but about how much he regrets not making his relationship with Shelley his number one priority in life.  He laments that it would have taken so little effort on his part, but he was caught up in other priorities and missed those opportunities.  The fact that the message Eric is most focused on is on honoring personal connection and feelings tells the reader that this is far more important than his vengeance.

It's also telling that Eric does not go to visit his former bandmates or other presumed friends.  This is another way in which Shelley is centered despite being dead.  It is her relationships which are key to Eric.

The final proof that The Crow is not celebrating toxic masculinity is the final battle between the crimeboss (Top Dollar) and his sister against Eric.  The sister has realized that the crow companion is the key to Eric's power.  She arranges for the crow to be shot, which destroys Eric's invulnerability.  The male power fantasy is destroyed.  Eric is no longer able to hurt others without facing consequences.  This is something that rarely happens in toxic masculinity stories.  Vulnerability is seen as emasculating and is thus avoided at all costs by those who only want an excuse for violence.

Eric confronts Top Dollar and is run through, effectively killing him for a second time.  Top Dollar is unharmed and gloats to Eric that his efforts have all been meaningless.  Meanwhile, the sister is about to catch the crow, wanting to claim its power for her own.

Instead of surrendering, the crow flies at the sister.  It pecks out her eyes, which could be interpreted as manifesting her blindness to the truly important things in life or as an example of how even the very small and seemingly helpless can bring down those who are much more powerful.  The sister becomes disoriented and falls to her death.

Eric reaches out and touches Top Dollar, unloading all the painful memories of Shelley's attack and prolonged death.  "All of her pain... all for you."  Faced with the consequences of his order, Top Dollar also falls to his death. 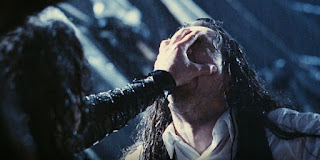 It's important that Eric and the crow are not the direct instruments of the final bosses' deaths.  It's also important to note the final attacks are not celebrations of unilateral violence.  The crow's attack is the most violent of the two, but it is not attacking from a position of power.  It is defending itself against someone who wants to abuse its inherent strength for their own purposes.  It is refusing to be used and defying the implied order that the powerful should control those smaller and weaker than themselves.

Eric's defeat of Top Dollar is even more explicit.  It isn't violence that takes out the final boss.  It's feelings.  Feelings are the ultimate power, not the ultimate weakness.

Perhaps this is more splitting hairs than a true distinction, but to me, these differences are significant.  It takes Eric out of the realm of toxic masculinity.  He begins as a male power fantasy, but ends as someone whose love conquered all.  The end of his story isn't him striding off into the sunset to solve yet more problems with violence, but him lying on his grave, waiting for his one true love to return to him.  She comes to him and smiles, bringing him home to the land of the dead with her (and, in my opinion, enjoying a happily ever after).  I think it's implied that she didn't need vengeance, she only needed him to be content and then they could be together. 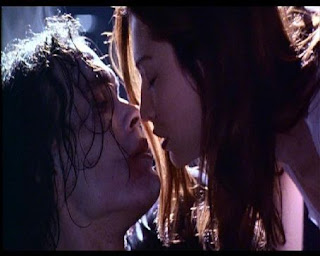 The story of The Crow is one of Eric growing beyond his pain and regaining love.  And that is nowhere near toxic masculinity.

Posted by Jennifer Carole Lewis at 01:48