This year has been so difficult and finding joy has been a challenge, so here's some fun stuff that's made my life livable.

I've been reading more non-fiction than fiction this month.  It's something that tends to happen in waves, especially if I find something that intrigues me.  And these two books definitely got me thinking.

The Secret Poisoner: A Century of Murder by Linda Stratmann

I promise I haven't taken up a new hobby.  This book is all about the development of toxicology detection between 1800-1900.  It was a fascinating look at a variety of cases and trial and experimentation to reliably detect poison residue after death.  Two things I learned especially stuck with me.  One, pharmacists and grocers use to be able to dispense "quieteners" over the counter, an opium-based solution that was explicitly marketed as a way for wives to sedate their belligerent and abusive husbands.  Two, the number of doctors who suspected that their patients were being slowly poisoned and didn't say anything to the patients in question is appallingly high.

On the Clock: What Low-Wage Work Did to Me and How It Drives America Insane by Emily Guendelsberger

Guendelsberger went undercover at McDonalds, Convergys and Amazon and while I knew those companies didn't treat their employees well, I was shocked to learn how bad it actually is.  It was disheartening to learn how many of these corporations rely on high levels of turnover to keep salary costs down.  It starts with a historical look at Ford's assembly line, which paid far more than the standard day's wage but was considered de-humanizing and discouraging.

Sleepy Hollow.  I started rewatching this a few weeks ago.  The story-telling is a little uneven but the chemistry between Tom Mison and Nicole Beharie is amazing.  I'll admit that the first time I watched the show, I was hoping that they would develop a romantic relationship.  But on this watch, I'm really appreciating the depiction of a strong friendship between a man and woman.  I like fish out of water stories so I enjoy watching Ichabod's reaction to modern society.

Star Trek: Discovery, season 3 (spoilers).  I love Star Trek and I've always thought that the series worked best when it was looking forward, so I'm very much enjoying the season 3 switch to 700 years in the future.  I love the new character, Booker, and his relationship with Michael.  And of course, my girl Tilly is having an awesome season.

All Rise.  I discovered this show last year and it's become a new favourite.  I enjoy legal dramas and was excited to see one from the judge's perspective.  The cast is amazing and the dialogue is witty.  The second season is set during the pandemic and I think the show has handled it rather well.

I'm still loyal to the Mandalorian and Ghost Rider, but I can't watch Sleepy Hollow without being reminded of how undeniably hot Tom Mison is, especially with long hair and the beard.  He's courteous and a gentleman, smart and loyal.  And the man can rock a frock coat.  I like how he respects his partner's expertise and skills, but is still protective of her. 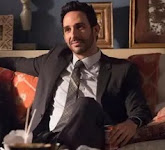 I also had a refresher of another cinnamon roll hero, Aram from The Blacklist, played by Amir Arison.  He's kind and sweet, a man who sees the best in people.  Add in the fact that he's a passionate defender and protector, and he's just the kind of hero that I adore.

I've been listening to my burlesque playlist a lot.  Most of the songs are from the movie Burlesque, but I added in some other classics like "Diamonds Are A Girl's Best Friend" and "Candyman."  I like the boldness and confidence of burlesque songs, but my favourites are the ones that include humour, like "A Guy What Takes His Time" and "I am a Good Girl."

Posted by Jennifer Carole Lewis at 02:12

Email ThisBlogThis!Share to TwitterShare to FacebookShare to Pinterest
Labels: review, Things I Love