I've decided to start a new monthly feature sharing what I'm currently enjoying.  This year has been so difficult and finding joy has been a challenge, so here's some fun stuff that's made my life livable.

I really like the Barnes Brother books because there's a rawness to them that speaks to me.  In Wrecked, Abby is trying to reclaim her life and her identity.  She's spent a long time trying to be what she should be and trying to fit her life into preconceived boxes.  It's scary for her to abandon that structure and be free.  I connected with that.  In Razed, Keelie is struggling with a guilty past she doesn't want to talk about but is also facing life with a "f*ck you" attitude.  In Busted, there's a beautiful slow burn romance between two people who aren't looking for it any more.  That one is my favourite and the one I've re-read most often.  Ruined is a powerful story about recovery and being true to one's authentic self. 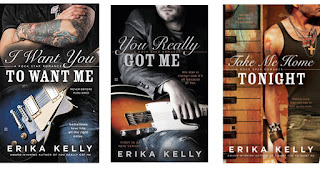 The Erica Kelly series is full of energy and fire.  It pairs some of my favourite things: music and happily ever afters.  Everyone is trying to find success in their own way and the first two books touch strongly on the dangers of addiction and how prevalent it can be in the performance industry.  The third book, Take Me Home Tonight, explores the challenge of finding a new normal after a traumatic event.

This bit is a highly personal reason why I love these books.  My 16 year old son is a huge 80's rock fan and whenever he sees these books on the table, he begins to sing the title songs.

I've got a couple of shows on the go right now that I'm enjoying.

First and most enjoyment is The Mandalorian.  It's intergalactic bounty hunter single dad catnip to me.  It's Star Wars, it's a "character wanders through different places and becomes involved in local issues" Western-esque, it's a guy learning to be a dad to a superpowered infant.  All things I absolutely love (and all I can share without spoilers!) 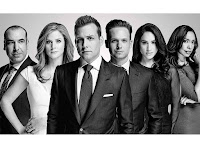 A new one that I'm catching up on is Suits.  I love law shows that actually look at the law and this one is full of geek references and witty dialogue.  This one got me with an exchange between Harvey and Mike.  "What's the gun for?"  "We're going to go start a knife fight."  I was braced to DNF the series quickly, but instead I got sucked in by the amazing characters.  The heroines are wonderfully written and complex individuals.  I love Donna's independence and competence and Jessica's cool superiority and control.  I'd probably love it more if it was all about them, but the heroes aren't too bad either.  I'm on Season 3 and I'm even starting to have a grudging admiration for Lewis Litt.

And one more that I'm so thrilled to find on my Disney plus plan is Once Upon A Time In Wonderland.  It was a single season but I enjoyed it so much!  I wasn't a fan of the original Once Upon A Time but I caught the Wonderland version while channel flipping and just adored it.  (Eventually I went back and did enjoy the original but it took effort.)  The season arc is a beautiful romance novel between Alice and Cyrus (a genie) and has a brilliant set of villains with Emma Rigby as The Red Queen and Naveen Andrews as Jafar.

I have a fickle heart when it comes to my fictional crushes.  Or maybe it's just a broadly appreciative taste for hotness in all its wonderful forms.  But no list of the things that I'm enjoying would be complete without the imaginary stories I find myself composing.  Creating a little fanfic is one of the primary ways I cope with difficult situations.  It never fails to re-energize me. 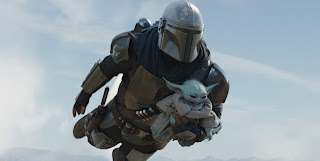 I've had two which have dominated my imagination of late: Pedro Pascal as The Mandalorian and Gabriel Luna as Ghost Rider (from Season 3 of Agents of SHIELD).  For my Mandalorian fanfic, I created a plucky, cheerful Force-sensitive engineer (think Kaylee from Firefly as a Jedi) who joins the Razorcrest to keep it flying and to watch over Baby Yoda when the Mandalorian is busy mandalor-ing.  For Ghost Rider, I paired him with Firestar (from The Amazing Spider-Man and Friends Saturday morning cartoon) but I made her an independent superhero who is also working as an accessibility consultant for the university that Robbie Reyes's paralyzed brother attends.  The two of them team up for justice and vengeance. 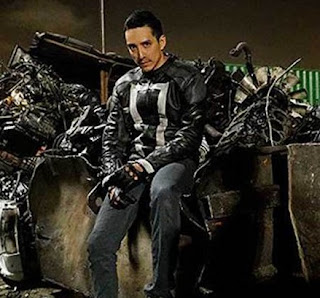 And of course, each partnership ends up having Feelings.  And Kissing.  And More Feelings.  Because the lack of that is why I write superhero romance to start with.

And I have to share one cool (though minimal) brush with celebrity.  A friend on Twitter wished me a good night's sleep.  I replied that I'd gotten it, including a weird dream about me and Gabriel Luna being in a pancake making contest.

Last but not least, I'll share the songs that I've been finding myself playing on repeat a lot.  Losing myself in music is my preferred form of meditation and I often connect songs with scenes or stories.

I've been listening to ADONA's Hit Me With Your Best Shot (a cover of the Pat Benetar classic that was featured in the Birds of Prey movie).  It's a haunting, slow version of the original and to me, it's perfect for someone slowly standing up against someone who has been hurting them and refusing to back down.

Posted by Jennifer Carole Lewis at 01:54

Email ThisBlogThis!Share to TwitterShare to FacebookShare to Pinterest
Labels: Things I Love